Having read the two other books in the Bev and Carol memoirs, I was eager to read this third offering.

Stranded in the Seychelles didn’t disappoint.

Our two fun-loving girls are a little bit older now, a little bit wiser and both in the teaching profession. Bored and with direction problems they decide to take up teaching positions on the other side of the world.

They encounter an eclectic group of people, ranging from the eager locals to a group of varying foreign nationals; as well as a government not exactly sure of where it’s going. There is an element of pathos to the recollections as it looks at the restrictions placed upon them and the local people, the undercurrent of control, and the poverty which surrounds them; all of which doesn’t sit very well with our two girls.

That said, the humour is there in bucket-loads, the sharp wit, the wry observations and the tendency to throw two-fingers up at authority. It didn’t seem as if I was reading this story, it was more like listening to two friends recounting their adventures whilst sitting down the pub with a few glasses of wine and a couple of beers in an atmosphere of joie de vivre. Lovely stuff! 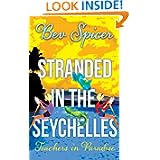